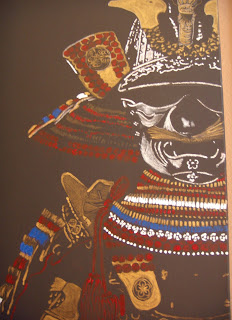 Posted by zombieBlanco around 9:04 PM 2 comments:

The Valley of the Giants

I took a step back in time last night as I visited the Eureka Theatre for a screening of the full length 1927 silent film “The Valley of the Giants”. Great venue, great film and, of course, great audience. The theatre is one of those big old Art Deco buildings that many of us remember fondly from our childhoods. (Memories that always seem to include throwing popcorn from the balcony onto our friends in the floor seats.)
The movie was filmed in Humboldt County in 1927 and starred Milton Sills and his IRL wife Doris Kenyon. It had the requisite hero (mightily cheered by the audience) and villain (hiss!) and a wonderful run-away-train scene. For most of the participants the real treat was the opportunity to see our local environs as they were over eighty years ago. This included shots of Eureka, Samoa, Avenue of the Giants, Sequoia Park and the Eel River Valley, and both the inside and the outside of the Carson Mansion. The opening shot showed redwood trees growing all the way to the ocean, which was almost sad enough to make me weep.
It was quite a treat to watch a film without dialogue, as it really heightened the visual experience. Plot and storyline could only be advanced by what was filmed, not by what was heard. You can see how these early films really helped to establish cinema as a visual art. We did have a wonderful accordionist who played throughout the film, which was a wonderful dramatic addition, without detracting from the pace of the film itself.
Not many films from this era have survived intact due to improper storage and film degradation, but we got lucky with this one as it was a personal favorite of Jack Warner and was stored in his vault until his death in 1986. Prints were made by the UCLA Film and Television Archives and the theatre received special dispensation to play it after proving that the required 35mm projectors were on site.If you ever get the chance, I highly recommend going to see a silent movie in an older venue like this. In this day and age of movies on your laptop or personal dvd player, it’s something out of the ordinary.

Posted by zombieBlanco around 12:52 PM 2 comments:

Busy weekend with The Good One and her boyfriend in town. Here are some pics from my monthly art crawl. 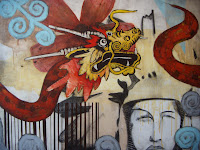 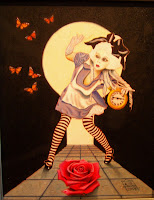 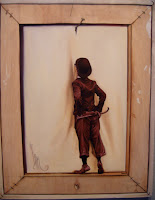