When the big box of food arrived at the door it was a little like Christmas. I tore open the top and excitedly looked down onto the pile of small cardboard boxes that would be my meat-and-potatoes for the next thirty days. Each meal was color coded to easily sort the breakfasts from the lunches from the dinners from the ‘desserts’.


At the end of my sorting and storing, the pantry looked neat and slim. I felt like I had already started to lose weight. I was so excited for the next day and the dieting wonders it would bring. 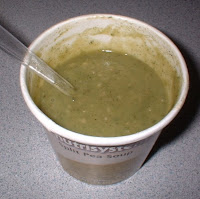 Many of the NutriSystem ads you see or read mention the word ‘delicious’. After a full day of their food, I pretty much ascertained that NutriSytem has a much different interpretation of delicious than every other human being on the planet.


By the end of the first week I realized that all of the lunches and dinners* fell into one of the following four categories: Okay, Bad, Very Bad, and No.

Okay: this doesn’t mean- Q: How was your dinner? A: Okay.
This category is for food you are okay with eating after being adrift at sea for three or four days. Or, marginally, if you are an astronaut and actually in space.

Very Bad: looks and smells so bad you wouldn’t feed it to your dog.

The majority of the meals fit into the middle two categories, with it being a red-letter day if both your lunch and dinner were Bad. So far two of the meals have hit the Okay mark. One of the dinners because I could recognize a mushroom slice as being representative of its real-life counterpart. That is to say, it looked like a mushroom slice, even if it didn’t taste like one. The other was a lunchtime soup that tasted like a really, really, cheap can of bean soup you would buy from the used-food store. A small handful of meals have made it into the NO category. I would need to resort to scatologies (shit, crap) and textspeak (WTF?) to even begin to try to describe these meals. Hey, I ate the stuff I wouldn’t give to The Puppy, so you get the feeling how bad No is.


After a week on the diet I’ve lost three pounds. For the most part I haven’t been hungry or cranky and the plan is ridiculously easy to follow. I do think that people who dig deep into their pockets for the outrageous amount of money for the month’s worth of food may be disappointed to realize that they will be adding a minimum of three grocery items to every meal (except ‘dessert’). The upside is that these added-in items will be tasty, nay even ‘delicious’.

*I’m going to save discussion of the breakfasts and ‘desserts’ for a later posting.

Posted by zombieBlanco around 6:31 PM

Thanks for trying this so I don't have to!

ZB, it looks like something my dog threw up after I fed it to her... There's no way I could take the gruelling path that you are. Gruel, geddit? Har-Har-Har! (well, someone's got to laugh at my joke). V. Funny post(s)

I wish the internets had smell-o-vision so you guys didn't have to rely on my ramblings to get a true taste of what's up.

You ramble so evocatively, though ;)

Yeah "used-food store" was my favourite part too. Doesn't Mark work at one of those?